After talking about improvements to the driving physics in my last blog, I gave much thought on what to talk about next.
We are currently working on making improvements based on your feedback after the December Closed Beta,
and proceeding with the relevant work of fixing and doing additional development.

I think I gave this so much thought because there are many things I want to talk about.

Continuing from the improvements to the driving physics, I would like to talk about the progress of the in-game player experience today.

Many Racers from the Closed Beta gave feedback that the game was hard to play because the User Interface (UI) wasn't intuitive.

We believe that the in-game UI needs to be intuitive and easy to see.
Based on the characteristics of Item and Speed Modes, the information displayed in both game modes must be communicated clearly.

The dev team took this into consideration and formed the in-game UI,
but the results of Closed Beta showed that we were not able to meet the Racers' expectations.

Since the UI is critical for creating a good experience, it needs to go beyond the design composition.
It must be easy to use, give good information and evoke the right emotions from everyone that plays.

Thus, it is our vision to develop a good User Experience (UX) together with players by listening to the stories told by our Racers,
more so than just making it based upon our own mindset.

For these reasons, the dev team decided to rethink the in-game UX from scratch.

We are actively having many discussions on what can be done to increase usability and improve the experience while also meeting the basic requirements.
We are also using advanced equipment with pro gamers and influencers such as eye tracking to see where a player's attention goes and how it changes in each situation. 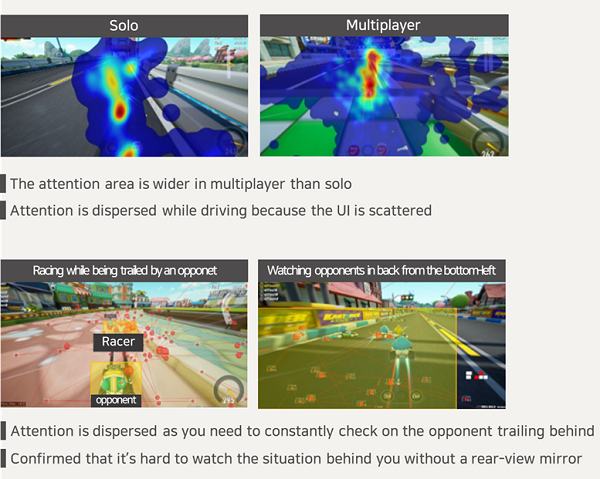 We took note of the focus-group test results and Closed Beta feedback,
and applied what we learned to the position and size of each UI element to prevent players from getting distracted as much as possible during gameplay.
The position of UI elements will be rearranged closer to the center of the screen in order to provide unified information,
and we decided to adjust the size and shape to make it easier for players to perceive accurate information.
Also, many players gave feedback that it’s hard to check how charged the Boost Gauge is due to the gauge being curved.
The current curve shape will be changed to a straight line to make it more intuitive. 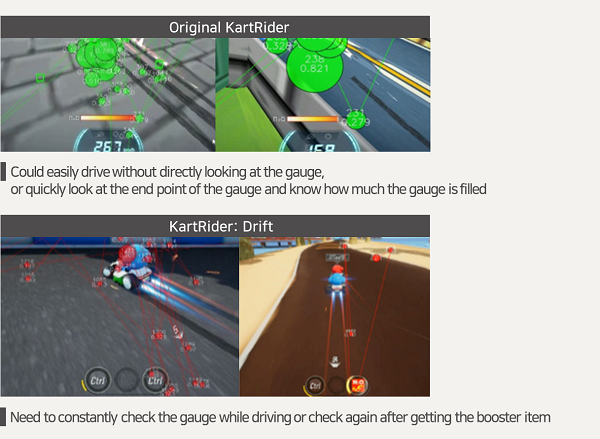 In the long run, we are also preparing a feature that will allow for customizing the position and size of in-game UI elements.
Each Racer will be able to freely adjust the settings to match their skills and preferences.
Racers, the feedback you’ve shared with us is the direction KartRider: Drift is taking.
That is why I believe communicating with you, our Racers, is so important.
Please continue to keep up your interest in KartRider: Drift and stay tuned!
-JL-