Improvements to the driving physics and the in-game UX were introduced in our first two Dev Blogs. Today, I want to talk about something new that we’re preparing.
As we compiled your feedback, made changes, and continued development after the December Closed Beta, we also analyzed the gameplay data from the Closed Beta period.

Based on your feedback and gameplay data, we have been working on ways for you to get used to KartRider: Drift and have fun playing it,
and we are applying those changes during the development process. As a part of these changes, I would like to talk about the Racing School system today. 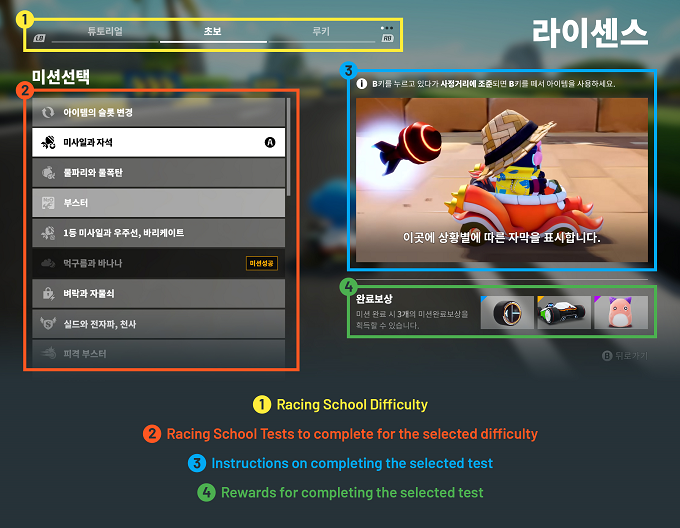 A preview of the Racing School menu, showing a list of Beginner tests. These include tests for using the Water Wisp and Water Bomb items,
activating the Booster and (selected) using the Missile and Magnet items. Successfully completing the selected test will reward you with various items.

The Racing School has two purposes:

1.     Act as a guide for Racers new to KartRider and KartRider: Drift.

2.     Provide a challenge for Racers who have experience with the original game and want to test their skills on their own.

As we analyzed the gameplay data from the Closed Beta, we found out that Racers who were new to KartRider had trouble drifting.
Many Racers also tried to improve their skills through external videos and guides, and there was a lot of feedback concerned that much of the game lacked the elements to aid beginners.

We think it’s a must to have a system that helps you learn how to play KartRider: Drift and feel the joy of driving. Rather than a simple tutorial,
we felt that a system where Racers could test their own skills and set new goals for themselves while taking on challenges would work the best.

To provide a new practice space for improving your skills on your own in the next Closed Beta,
we are giving our all in developing the Racing School system so that you can improve and take on new challenges.

We hope you’re excited about this new feature, and that it helps you hone your driving skills!