I’ve talked about what is being developed after the first Closed Beta through the previous dev blogs.

Today, I would like to talk instead about the interim check we performed to gauge the improvements and advancements made to KartRider: Drift. Based on the feedback and gameplay data of Racers collected from the first Closed Beta, and the Focus Group Test results of pro gamers and influencers, the developers have been working on improving KartRider: Drift for the next Closed Beta.

We thought it was important to have a process where the developers could check if KartRider: Drift is changing in a way that Racers want, and review if the game is good enough to present to the Racers in the next Closed Beta. To do so, we had a second test with many of the same pro gamers who participated in the first focus group.

We wanted to find out in this check whether the things we talked about in our previous dev blogs were improved, and to receive feedback about what else needs to be worked on.

Now I would like to introduce the results of the second Focus Group Test to the Racers.

We improved the angle adjustment upon collision of the wall and kart body for each situation so that they are more natural,
and we confirmed that it functioned similarly to the drift in the original KartRider.
We received additional feedback that it was still hard to predict the movement of the kart body after the collision.
Further improvements will be made to the reaction force after collision and angle recovery. 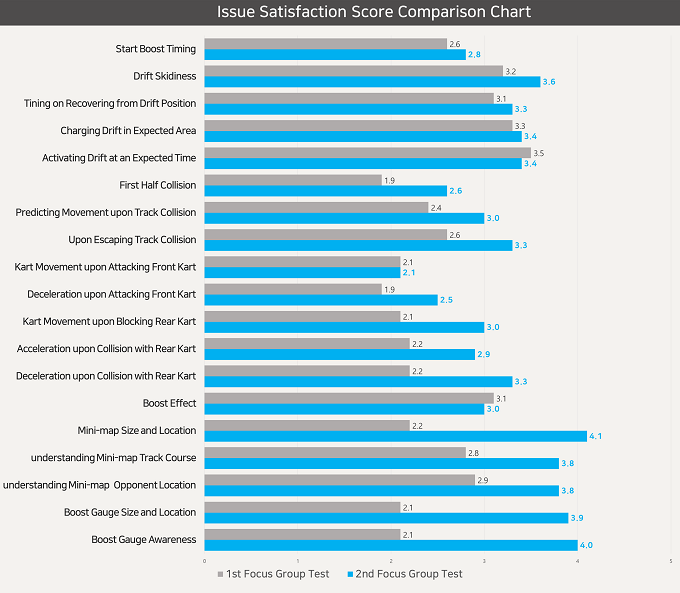 The difficulty of checking your driving situation due to the wide viewing range has been improved.
We confirmed that Racers' eyes were moving naturally within the necessary range without disrupting their attention.

The interim check showed that both the direction of our overall improvements and the developed content are going in the right direction.

Although some parts of the game are still lacking, we are excited to see that the sensation of driving is getting closer to that of the original KartRider,
and we feel more confident that we're finding the right balance to improve the fun of racing.

We will do our best during the time remaining until the next Closed Beta to make improvements to the other parts of the game.

We will see you Racers again soon with these improvements and more. Please stay tuned for more news about KartRider: Drift!